This Page is Still Work in Progress

A Catch-Up Package (CUP) is a special message (not on the blockchain) that has (mostly) everything a replica needs to begin working in a given epoch, without knowing anything about previous epochs. It consists of the following data fields:

To generate a CUP for a given epoch, a replica must wait until the summary block for that epoch is finalized and the corresponding per-round state is certified. As already mentioned, the entire replicated state must be hashed as a Merkle tree — even though a number of techniques are used to accelerate this process, this is still quite expensive, which is why it is only done once per epoch. Since a CUP contains only the root of this Merkle tree, a special state sync subprotocol is used that allows a replica to pull any state that it needs from its peers — again, a number of techniques are used to accelerate this process, but it is still quite expensive. Since we are using a high-threshold signature for a CUP, we can be sure that there is only one valid CUP in any epoch, and moreover, there will be many peers from which the state may be pulled. Also, since the public key of the threshold signature scheme remains constant over time, the CUP can be validated without knowing the current participants of the subnet.

The code to manage the Catch-Up Package can be found on github.

Use Cases of Catch-Up Package

Adding New Nodes to a Subnet 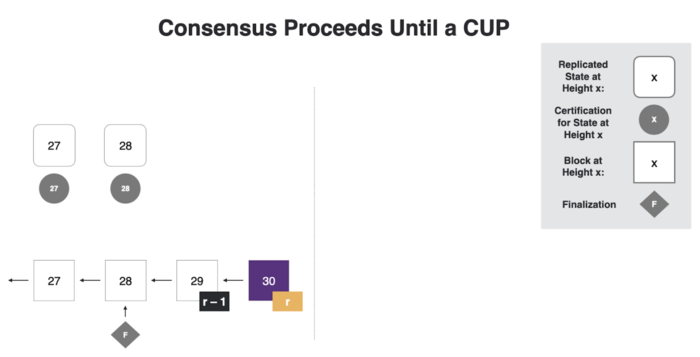 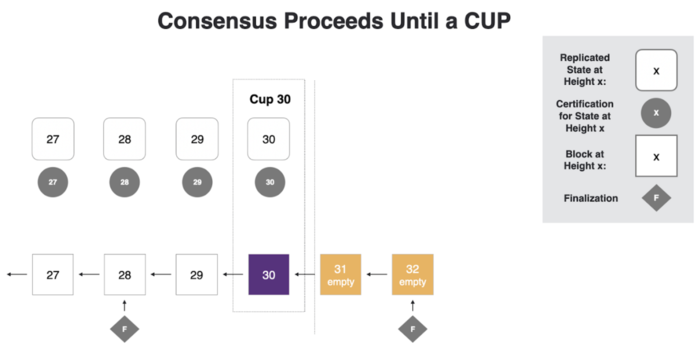 Starting a Node from Catch-Up Package