In 2013, the Bitcoin network experienced tremendous growth, which inspired many people. At the time, DFINITY founder Dominic Williams was running an MMO computer game he had built and grown to several million users, using custom technical infrastructure. He caught the Bitcoin bug like many others, and transitioned to working full-time in blockchain. Eventually, this would lead to the launch of the Internet Computer, which realizes the World Computer blockchain vision. The Internet Computer project is one of the oldest in crypto, incorporating DFINITY research that begun in 2015. Since 2018, the DFINITY Foundation has run the blockchain industry's largest R&D (research and development) operation. 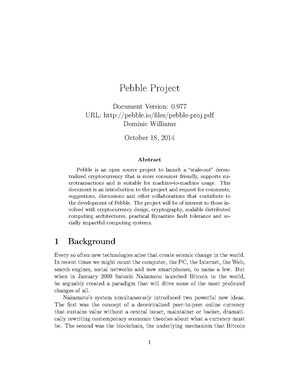 By the end of 2013, Dominic was already seeking technical means to build faster blockchains that could process more transactions per second, which he hoped would support a trade in virtual goods within the computer games ecosystem, and he acquired the domain name "gamecoin.org." This activity led to him spending 2014 working on a blockchain project called "Pebble." His work on Pebble pioneered two major firsts in blockchain: (1) the adaptation of traditional distributed computing mathematical techniques for use within a blockchain network protocol, and (2) an effort to design a scalable blockchain that could process hundreds of thousands of transactions a second.

While working on Pebble in 2014, Dominic connected with the early Ethereum community, and quickly became an avid early supporter of the project, which he remains to this day. At the time, the concept of a blockchain that could run software (i.e. smart contracts), which processed and stored data within its autonomous, unstoppable and tamperproof universe, was both revolutionary and controversial. The creation of a new evolutionary branch within blockchain, and its departure from a coins-only design, upset some parts of the Bitcoin community at the time, leading to many debates. Vitalik Buterin, the founder of Ethereum, credits Dominic with co-inventing the term "Bitcoin Maximalism."

At some point, the concept of a World Computer was mooted within the Ethereum community. In those early years, however, most people believed that it would be impossible to engineer a blockchain with the capabilities required to play the role of a World Computer, but Dominic thought otherwise, and he decided to dedicate himself to realizing the idea. For that reason, he decided to stop work on Pebble, and direct all his future efforts towards the realization of a World Computer.

By 2015, Dominic's thinking about blockchain design had become more mature, and he began proposing new consensus math and applied cryptography that might be used to produce a true World Computer blockchain. At this time, he began using the name DFINITY as a brand for his work, which takes its characters from decentralized infinity. His original purpose was to produce technical works that might be used as the basis of Ethereum 2.0 or 3.0.

Through the period 2015 to 2016, Vitalik Buterin and Vlad Zamfir were the Ethereum project's primary consensus researchers, and they were highly focused on developing cryptoeconomic schemes under the "Casper" banner. Dominic was more focused on finding new ways to leverage cryptography, and devising alternative blockchain architectures that might enable a World Computer to be produced. Owing to the long-term nature of Dominic's work, and its more technical approach, eventually it became clear to him that DFINITY should become an independent project.

Although the DFINITY project eventually pioneered its own path, important traces of DFINITY thinking remain within the Ethereum project. For example, early in 2015, Dominic first proposed using a scheme called Threshold Relay, which involved using BLS cryptography to generate random numbers, then using those numbers to drive a blockchain — essentially by selecting random committees of nodes that would produce and finalize blocks by "attesting" to, or "witnessing" them. Ethereum 2.0's Beacon Chain is partly a realization of that 2015 concept.

Dominic's own work at DFINITY also had many important antecedents. For example, he himself became interested in the idea of using cryptography to generate random numbers and using them to drive consensus after reading the Random Oracles in Constantinople: Practical Asynchronous Byzantine Agreement using Cryptography research paper, among others, in 2014. One of the authors of this paper, famous cryptographer and distributed computing scientist Victor Shoup, joined the DFINITY Foundation in 2021.

Early in 2015, Dominic's Threshold Relay scheme was redesigned to use BLS threshold cryptography to generate random numbers. This was thanks to a meeting with famous cryptographer Dan Boneh at Stanford University, which was near to where he lived at the time in Palo Alto, California. Dan Boneh is the B in "BLS," and later, early in 2017, the DFINITY Foundation hired Ben Lynn from Google, who was the "L". For some years after Dominic began promoting Threshold Relay, Vitalik Buterin raised concerns about the safety of using BLS cryptography, but eventually he was convinced, and Ethereum 2.0 now also relies entirely upon it.

The complexity of Dominic's early technical designs, and general disbelief about the viability of building a World Computer blockchain, made it hard for him to muster support for his ideas, and persuade the Ethereum community to work on implementations. However, in 2016, Dominic was co-founder of a crypto incubator called String Labs. He persuaded co-founder Tom Ding that String Labs should incubate DFINITY, and help it become a standalone project. At this time, they were joined by Timo Hanke, the developer of AsicBoost, and the CTO of CoinTerra, from the Bitcoin community, and other people. Dominic decided to follow the fundraising example provided by Ethereum, and create a neutral not-for-profit foundation to drive development of a World Computer blockchain protocol. Accordingly, the DFINITY Foundation was formed in Zug, Switzerland, with Dominic as President, in October 2016, later moving to Zürich, Switzerland, when it established a large research center there.

In the February 2017 ICO, known as the Seed Round, ICP was sold in exchange for bitcoin (BTC) and ether (ETH), which was marked-to-market, such that a contribution of 1 Swiss franc was rewarded by 30 ICP. This meant that hundreds of members of the public purchased ICP at approximately 3 cents each, later making large financial gains. Through this ICO, the DFINITY Foundation received $3.9 million in initial funding, although total cash receipts were greater, as the price of the ETH and BTC received rose dramatically before it was sold. 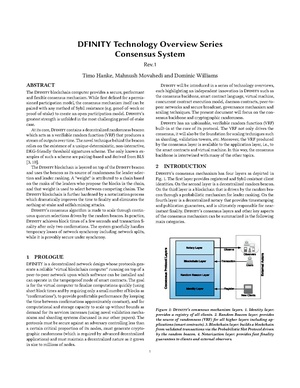 This initial funding allowed the foundation to begin expanding its operations. Notable early technical hires included Ben Lynn, and Andreas Rossberg, also from Google, who was the co-inventor of WebAssembly. They were also joined by Artia Moghbel, who headed up operations, and had worked at a VC that had funded the MMO game Dominic had earlier developed. By October 2017, Dominic was able to demonstrate an initial version of its test network to the world for the first time.

In January 2018, DFINITY published its first formal white paper describing its consensus system, although it had been described informally for some time. With this, and the test network in hand, the DFINITY Foundation decided to raise significant additional funds and scale-out its operations — since it the scope of the R&D work required to deliver a true World Computer was substantially broader than originally anticipated.

The DFINITY Foundation raised more than one hundred millions dollars in two funding rounds in 2018, the Strategic Round and the Presale Round. This enabled it to scale its operations more aggressively. The major challenge was building out an R&D organization that could effectively combine blue sky computer science and cryptography research activity, with engineering operations. In practice, this was a process that took many years, and many bumps on the road were passed en route to the organization as it is today.

In 2018, the DFINITY Foundation's CTO (Chief Technology Officer), Jan Camenisch, a famous cryptographer, was hired from IBM, where he worked as a Principal Research Staff Member. He became instrumental in building out the Zürich research center. This included recruiting numerous well-known cryptographers to the World Computer mission, whom he had often worked with before. Arguably, the DFINITY Foundation employs more well-known and highly respected cryptographers than any other organization in the tech industry. This is in sharp contrast to other blockchain projects, which often do not employ any cryptographers at all, preventing them developing custom cryptography to meet their needs.

Collectively, DFINITY Foundation cryptographers, researchers and engineers have published more than 1500 papers, collected more than 88,000 citations, and have created more than 190 patents. As the Zürich research center grew, it became the largest employer of ex-Googlers in Switzerland, with many joining from Google Research. Across all research centers, including California, more than 20% of all staff members joined from Google or IBM, and more than 20% are alumni of Zürich ETH and EPFL. The DFINITY Foundation has a better balance of the sexes than most tech organizations, and 43% of department heads across the world are women. 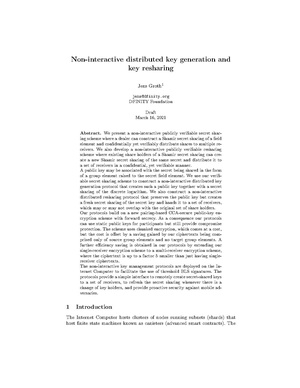 To launch the Internet Computer, the R&D team had to implement protocols that would allow it to establish chain key cryptography material on nodes in a decentralized network setting. This was achieved using a groundbreaking non-interactive DKG (distributed key generation) and key re-sharing protocol, devised by Jens Groth, another famous cryptographer working at DFINITY. This works in conjunction with updated protocols, described in "The Internet Computer for Geeks" paper. 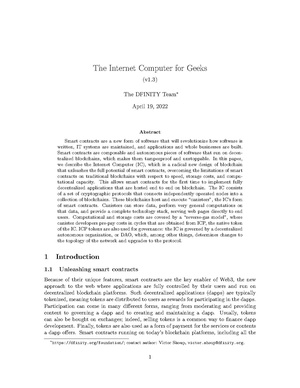 The scale of the technical challenges involved in creating a protocol that incorporated such advanced cryptography and protocol math was enormous, and was achieved only through the incredible efforts of a large and highly dedicated team of cryptographers, computer science researchers and engineers. The Internet Computer also uses a completely novel blockchain architecture, which is necessary to deliver the World Computer vision, and depends on many innovations in areas spanning its WebAssembly-based smart contract execution environment to new computer languages such as Motoko. The Internet Computer network is also adaptive, self-governing and self-updating, thanks to an advanced DAO called the Network Nervous System that runs within its protocols. It represents an enormous technical achievement.

The Internet Computer runs on a sovereign network of special node machines, which is dedicated hardware. Before its May 2021 genesis event and production network launch, a community of independent node providers had to be established, who would purchase or build these machines, and run them from data centers around the world. This was bootstrapped by the DFINITY Foundation.

The Internet Computer network underwent genesis May 2021, and transitioned into a decentralized production mode. This will be seen as an momentously impactful event in the history of tech and blockchain. Nonetheless, at launch, the Internet Computer project faced a firestorm of attacks from other projects in the blockchain industry, who feared its capabilities. The DFINITY Foundation, which is primarily a research and development organization, was ill-equipped to deal with the attacks, and was substantially disrupted for some time. The full scale of the attacks and corruption directed at the project is now slowly being exposed, including by investigative journalism efforts such as https://cryptoleaks.info.

The attacks that were launched also substantially disrupted the markets for the Internet Computer network's ICP utility token, and led to misconceptions and disinformation about the project becoming widespread. Thankfully, this situation is slowly clearing, and moreover, it did little to dent developer interest in the project.

The DFINITY Foundation, and the fast growing Internet Computer community, are focused on building-out a new web3 internet ecosystem, and eventually moving the vast majority of online systems and services onto the Internet Computer, in a replacement of traditional IT that drives a blockchain singularity.