On the Internet Computer blockchain, canister smart contracts can make HTTP outcalls to specified URLs, either to directly obtain off-chain data, or to interact with off-chain systems, such as Web 2.0 services or enterprise IT infrastructure. The results of these calls are processed and agreed by consensus, preventing nondeterminism. This avoids the need for trusted oracles and bridges.

Often, smart contract software needs to obtain real-world data, which originates from outside the secure and unstoppable on-chain universe that the blockchain that hosts them provides. Smart contracts may also need to interact with off-chain systems that are outside this universe. Because of the way blockchains work, historically this has presented major hurdles to blockchain developers.

For example, to obtain off-chain data, smart contracts have traditionally interacted with centrally-operated oracle services, such as Chainlink. These services are provided by trusted intermediaries, such as corporations, which perform the role of copying off-chain data onto the blockchain where it can be accessed by smart contracts. The problem is that these services must a) be trusted to be honest, and not get hacked, or otherwise become faulty, and b) be paid. Moreover, they cannot help when smart contracts need to interact with off-chain services, for example by calling into web-based APIs. To solve for these needs, the Internet Computer provides an "HTTPS outcall" feature.

HTTPS outcalls allow canister smart contracts hosted on the Internet Computer to request a URL, for example to download a time series recording the recent prices of an asset published by a centralized crypto exchange such as Coinbase Pro. When this occurs, every node in the subnet blockchain hosting the smart contract requests the URL separately. Each node then locally passes the result they obtained to a special function implemented by the requesting canister smart contract using a query call, which pre-processes the result with the aim of making it consistent with the results the other nodes have obtained and pre-processed (in our Coinbase example, since each node would request the time series at a slightly different moment, the results could be different).

If the pre-processed results obtained by query calls to the canister smart contract are sufficiently consistent across all the nodes, the result is agreed by consensus, and provided back to the smart contract that requested the URL so that it can continue trustlessly processing the original smart contract call (TX).

In order to trigger an action in an off-chain system, a smart contract may include a cryptographic chain key signature in its request for a URL. This allows the target service to validate that the request it has received was generated by a genuine smart contract execution that was agreed by consensus. In such architectures, when an off-chain service receives a valid request for a URL, it must take care to only execute it once, since many nodes will make the same request, and for each subsequent request after the first, it should return exactly the same result.

The canister HTTPS outcalls feature has been implemented as an extension of the IC protocol stack, particularly its consensus layer. The possibility of the IC protocol stack allowing for such extensions shows the powerful architecture of the IC and its consensus protocol. In this section we give details on the architecture of the feature: We show which components of the stack needed to be extended and which new components were required and explain a protocol flow through the stack. 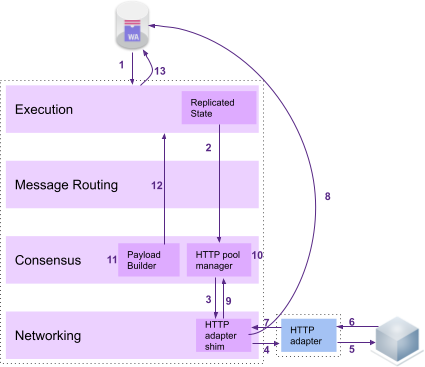 The figure above shows the process an HTTPS outcall request goes through, along with the new components that were added to make this feature work. The numbered arrows indicate the steps as follows:

How to reach consensus on result?

As explained above, every node makes a given HTTP request to the target server and receives a response. There are multiple reasons why the responses are not necessarily the same on all replicas for the same API query:

We next look at some examples on how consensus can be reached for HTTP responses. We illustrate the different cases below with an example of a simple weather API.

All responses are equal

The simplest case is that of all responses received by replicas being equal. In this case, no transformation function is needed as the responses themselves are already equal and consensus can be achieved on them.

Some responses are not equal

Assuming the case that less than one third of the responses can be arbitrarily different to the others and the others are all equal. The different responses can be a result of the server responding differently or nodes being compromised and falsifying the received (correct) response. This case is handled exactly as above by not requiring a transformation function and the IC consensus protocol taking care of the subset of deviating responses and going with the majority of replicas.

Variable parts in all responses

The most general case is that of each response returned by the HTTP server being different due to the reasons outlined further above, e.g., variable parts being contained therein. This case requires a transformation function to "normalize" the responses to be pairwise equal (for at least two thirds of the replicas). The transformed responses then can be consented on by the protocol as in the cases above. Clearly, less than one third of the responses can still be arbitrarily different as in the case above and we can still reach consensus.

As can be seen, all the above cases can be handled easily with an extension of the IC's consensus protocol. The important part is that the canister developer needs to provide the transformation function if required, i.e., in the typical case of using APIs. We refer the reader to the feature documentation for a recipe to write a transformation function and further information to help developers getting started with the feature.