Amazon Web Service (AWS) is a cloud computing service provided by Amazon. Today, outside of the Internet Computer universe, it performs a huge proportion of the data processing and storage involved with web3 services and applications, and runs a large proportion of nodes on blockchain networks.

As a consequence, when AWS has outages, this can directly cause web3 services that claim to be "decentralized" to fail. For example, a recent AWS outage took down a crypto financial exchange that claimed to be decentralized.

If AWS wished, outside the Internet Computer universe, it could shut down the vast majority of today's web3 services, applications and even entire blockchains. For example, AWS decided to shut down the social media service Parler for political reasons, demonstrating what might be possible if the regulatory environment turned strongly against blockchain. 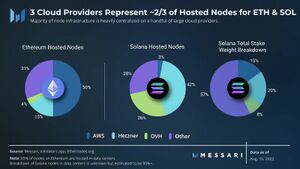 Sometimes the risk is disguised. For example, most web3 services and applications built using Ethereum, run off-chain, and communicate with local nodes run by Infura, a service provided by ConsenSys. Another option, widely used in the web3 ecosystem, is Alchemy. What users don't realize is that not only must these services be trusted, but the cloud computing services they run on must also be trusted.

Even if a developer builds a web3 service or application using their own server computers co-located in a traditional data center, rather than cloud instances, they are vulnerable to outsiders if they use a service like Infura. If AWS wishes to disrupt them, they can simply demand that Infura stops providing them with services.

Not only that, but a malicious insider working at either Infura or AWS can do much worse, and potentially steal tokens from the end users of web3 services and applications using a variety of attack vectors.

It is no exaggeration to say that outside of the Internet Computer universe, web3 depends upon the goodwill of Amazon Web Services for its functioning.

This is one of the reasons that the Internet Computer blockchain runs on a sovereign network and it provides an architecture that allows web3 services and applications to be built 100% on-chain in a manner that is secure and unstoppable.